The soul in ancient Egypt

The ancient Egyptians believed that what we think of as a soul consisted of more than one concept, perhaps because they saw it as something too complex to be expressed simply by a single word. The most common types of soul were the ka and the ba.

The ka was formed as a person’s double at the time he or she was created. It could lead one into adventures and scrapes (young people might be advised not to ‘follow the ka’, but to work hard). In a tomb, offerings were usually made for the ka of the dead person, and the word ka itself could be used to refer to food offerings.

The Egyptians also believed that a person’s ka contained some aspects of personality inherited from his or her father. 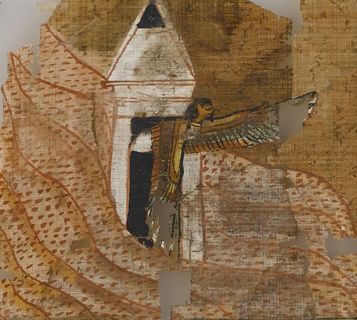 The ba was represented as a bird with a person’s head and is often shown in the Book of the Dead as the part of the dead person which leaves the environment of the tomb.

For example, in spell 92 we see the ba flying out through the doorway of the tomb (depicted as a white doorframe round a black interior, with a pyramid on the top, all against the background of the desert hills shown in pink with red dots). The Egyptians believed that the ba returned to the body every night in the afterlife.

The ancient Egyptians believed the shadow, which they called the shut (pronounced ‘shoot’), to be another part of a person’s soul. There are very few pictures of the shut; where it does appear, it was represented as a black silhouette with an eye. Spell 92 (mentioned above) was said to be ‘for opening the tomb for the ba-spirit and the shadow so that they may go out in the day’. These two elements, the ba and the shut, often appear in similar contexts in texts like the Book of the Dead. 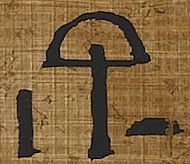 The word shut is written with a fan-shaped sunshade (seen in this detail from spell 92).

The Egyptians used the term akh to refer to a special type of spirit. This was the spiritual form a person took on by receiving the correct offerings and knowing the right spells. The word akh means ‘effective’ or ‘an effective one’.