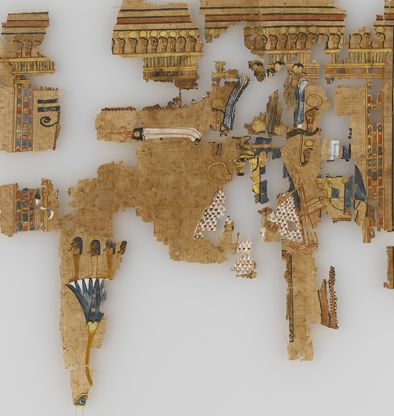 Osiris scene from Spell 125, Book of the Dead of Ramose

Spell 125 is usually the longest spell in the Book of the Dead. It is one of the key points in a person’s journey into the afterlife because it represents the point where his or her life and deeds were judged. The papyrus of Ramose’s Book of the Dead is quite broken up in this area.

The pieces that have survived begin with a scene show the god Osiris sitting under a canopy. He is wearing an elaborate crown, known as the atef-crown, and he holds a crook and flail. His body is wrapped in white linen, which is overlaid with a pattern of feathers. His face and hands are covered with gold foil.

In front of Osiris is a large lotus on top of which are the four Sons of Horus, gods who traditionally guarded the internal organs of a mummy. Behind him are Isis, his wife, and her sister Nephthys. Their hands appear below Osiris’ elbow and behind his head in a gesture indicating support.

To the left of these fragments would have been the famous judgement scene, in which Ramose’s heart was weighed against a feather, which represented the concept of maat, divine order. Only a very few fragments of that portion of the spell have survived. Other papyri exist which are more complete, for example the Book of the Dead of Hunefer at the British Museum, and these can give us an idea of what the judgement scene would have contained.

To the right of the scene with Osiris is a long text often known as the Negative Confession. It consists of a series of columns divided in two by a small image of a seated god.

The Negative Confession from the Book of the Dead of Ramose

‘Oh Blood-eater, who comes out from the place of execution, I have not killed a sacred bull.

Small images of seated gods from the Negative Confession, Book of the Dead of Ramose

It seems that the scribe began this section of the papyrus by writing the red portions of the text first. He seems then to have completed all the upper portions of each column before working on the lower sections - many of the negative statements below the row of seated gods do not match the gods with whom they are normally associated in other documents, and it is clear that the scribe, from time to time, missed out one of the negative statements and then had to insert the missing one at a later point when he realised his mistake.