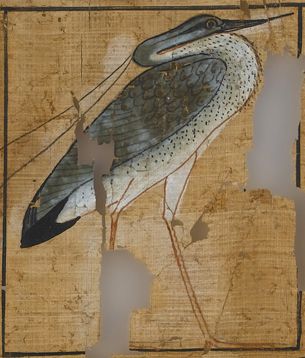 Spells 83 enables Ramose to turn into a benu-bird. This mythical bird was associated with the sun-god, especially the rising sun, and so with daily re-birth. In later times people equated it with the phoenix, perhaps because they were both believed to be repeatedly re-born from a fiery origin.

They way it was depicted varied at different periods. In the Books of the Dead it is usually shown in the form of a heron, as here.

The way the bird has been painted on this papyrus is very skillful and gives one a sense of the delicate shape of the bird’s body, and the downy feathers on its chest. The sharp beak is also really well depicted.

For being transformed into</span> a benu-bird. Words said by the Osiris, superivisor of archivists, Ramose, justified. I have flown up in primaeval time. I have become Khepri. I have grown like a plant. I have decked myself as a turtle. I am …

… the fruit of every god. I am the yesterday of these four of seven cobras who came into being in the east. Horus gives illumination from his body. I am the Osiris, superivisor of archivists, Ram[ose, justified.]