When did Ramose live?

We can use the evidence of the finds discovered in his tomb, as well as evidence from the papyrus itself (the forms of the written signs, and the clothing styles, etc., that appear in the paintings), to work out when Ramose was alive. 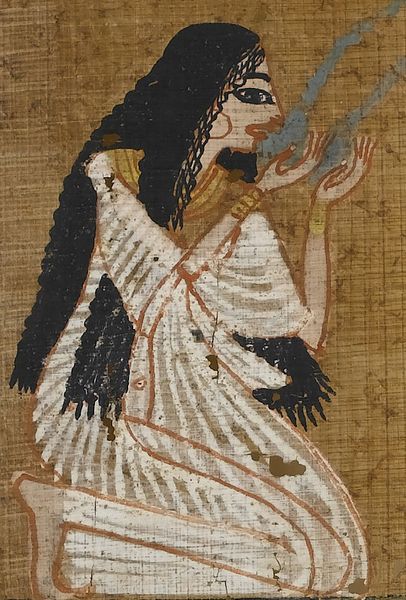 Ramose’s wife dressed in fine linen,drinking water from her hands. Detail from Spell 63A

Looking first at the archeaological evidence, as well as the papyrus, several objects were discovered in the same tomb, including a necklace, part of a pot and a large number of shabti figures. The latter are of a style very common at the beginning of the 19th dynasty.

As regards the evidence we can extract from Ramose’s papyrus, the forms of the individual hieroglyphic signs are a good indication of the date at which it was written, and they support a similar date around the beginning of the 19th dynasty. Finally, the clothing and hairstyles of the figures shown in the vignettes is consistent with the same date.

Flinders Petrie, who excavated Ramose’s tomb, placed it within the reign of Seti I (currrently estimated to be 1290–1279 BC) which gives the approximate dates when Ramose died. We can suggest therefore that he lived in the period around the turn of the 14th to 13th centuries BC.