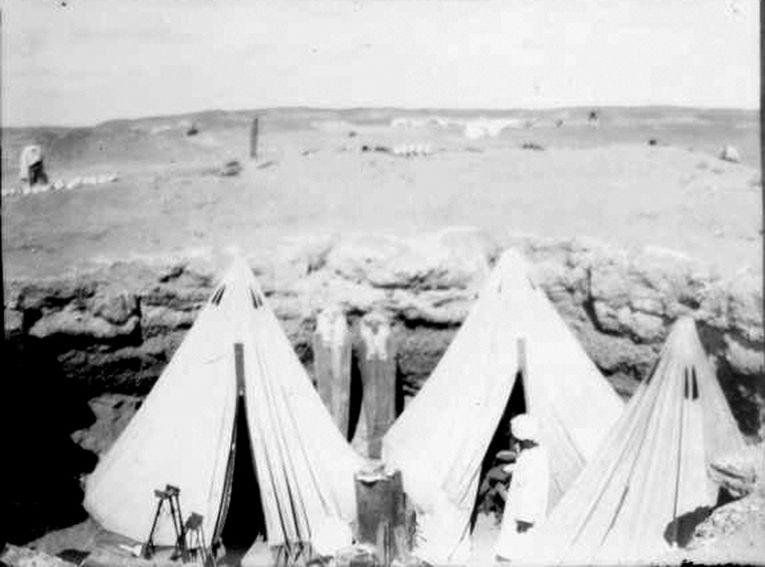 The camp at Sedment. Photograph courtesy of the Petrie Museum, London

In 1921 Petrie started working at a previously ignored site called Sedment al-Gebel. He described it as a:

‘cemetery continuous for three or four miles, as far as Mayana, the burial ground of ancient Henen-nesut (later known as Herakleopolis) which stands about five miles away in the plain’.

The site is about 70 miles south of Cairo.

Ramose’s tomb was found in an area known as Hill A. It does not seem to have been a particularly large tomb, although the full extent of the main chamber could not be determined because of a rock fall. Petrie estimated it to be 17ft by 7ft 7in by 3ft 6in.

Petrie gave the tomb the number 134 and identified the owner of the tomb as Rames on the basis of the fragmentary papyrus he found there and the inscribed shabti figures he found there. He also identified another individual buried in the tomb from other inscribed shabtis which were inscribed with the name ‘Mie’. It was fairly common practice for more than one person’s burial to be found in a single tomb. Usually the individuals in question came from a single family.

In addition to these finds, Petrie recovered a multicoloured pectoral necklace (which is now in the museum in Manchester) and the neck of a large jar, which, he records, contained ‘the bulk of the papyrus’. This was found just inside the doorway of the tomb.