The earliest burials discovered in Egypt very often include containers of food, cosmetic equipment, mirrors and other items for personal use. This suggests that already at this early stage, the ancient Egyptians believed that life continued after death in some form.

Later documents show that a complicated system of beliefs developed over time. For example, they belived that we might today call the soul consisted of a number of different elements. These elements relied on the existence of the body of the dead person as the place where they would all unite. So, the practice of mummification (the preservation of a body) developed over time from just wrapping the body in linen to a complicated process of removing the internal organs and drying the body out using chemicals before wrapping it up. Coffins were provided to house the body and tombs were built to protect it and any grave goods, as well as being a place where offerings could be left to feed the dead person in the afterlife.

The place where people were believed to go after death was where the sun went at the end of the day, below the western horizon. It included the Field of Reeds, also called the Field of Offerings which is illustrated in spell 110. 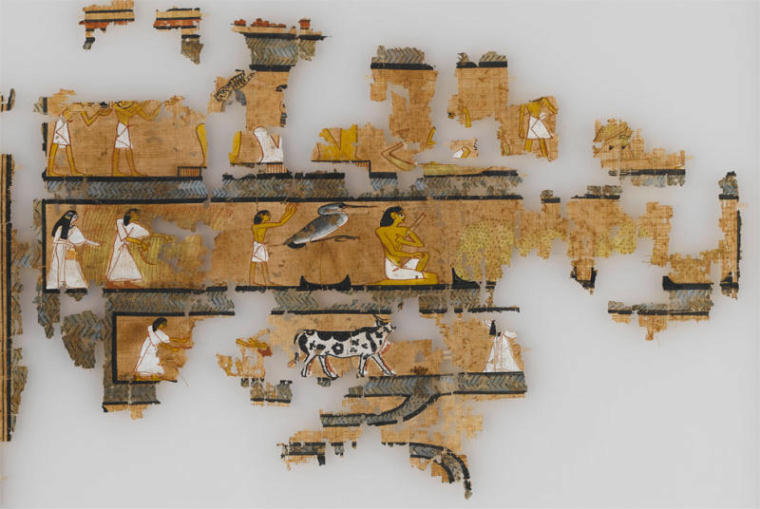 This was the place where the dead wanted to stay on their journey through the afterlife and was usually shown as a series of waterways. On the islands between the water channel, the dead were often shown doing agricultural work.

The god Osiris was the ruler of the afterlife and spell 125 is often illustrated with a picture showing the dead person being judged before Osiris. Another important god is the sun, the force which brought life to both this world and the afterlife.

The afterlife was full of strange creatures and dangers. The dead could survive any potential difficulties by knowing the correct things to say, which often included knowing the names of the creatures concerned. The utterances and names were recorded in funerary literature like Books of the Dead, so that having one of these documents in one’s burial equipment helped to survive these perils.