The origins of the collection of texts that we call The Book of the Dead can be traced back through other collections of writings, particularly the Pyramid Texts and the Coffin Texts.

The earliest records which tell us about ancient Egyptian funerary beliefs were inscribed in the later part of the Old Kingdom, around 2350–2160 BC, on the walls of chambers inside pyramids, and so they are known as Pyramid Texts.

The texts, which had no illustrations with them, have a number of themes and mostly relate to the afterlife of the king, which was thought to be associated with either Osiris or the sun god, or in the sky amongst the stars. The texts themselves seem to have been laid out according to a strict pattern on the walls of the interior chambers of the pyramids in question. 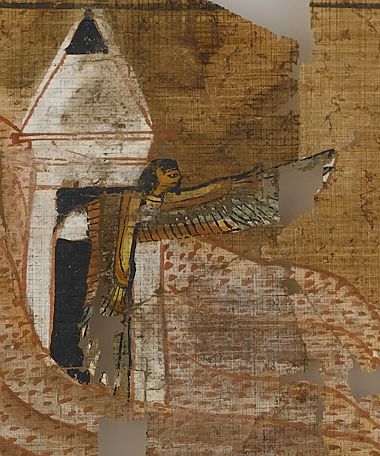 Ramose’s ba-spirit flying out of his tomb. Detail from Spell 92.

At the end of the Old Kingdom, some extracts of the Pyramid Texts occasionally appeared in the burials of private, non-royal people. This change developed further into the set of texts that we know as Coffin Texts, which were most commonly inscribed on the rectangular wooden coffins of non-royal people from the Middle Kingdom (around 2046–1794 BC).

Like the Pyramid Texts, the Coffin Texts were laid out on the walls of the coffins according to a clearly defined scheme. The texts were concerned with the continuation of life through the ka and the ba, the two principal elements of the soul in ancient Egyptian thought. There was a new feature in the Coffin Texts in the form of spells, which acted as guides to the afterlife. They were often illustrated with a map. A good example of this is found on the base of the outer coffin of Gua in the British Museum.

The Book of the Dead

The collection of texts which we now call the Book of the Dead first appeared in the early New Kingdom. It consists of about 200 spells, most of which can be traced back to the Pyramid Texts and the Coffin Texts. These texts were at first written on linen shrouds which were placed over the mummified body inside a coffin (for example, the shroud of Senneferi found at Luxor). By about 1450 BC, they began to be written on papyrus scrolls. The spells also appear on the walls of tombs, on coffins and on bandages wrapped around mummies. The Book of the Dead continued to be included in Egyptian burials until the Ptolemaic period.

The spells were often illustrated with small pictures (vignettes) which could be very detailed (as is the case with the vignettes of Ramose’s papyrus). An important new spell, which is not found in the earlier funerary texts, is Spell 125 in which the dead person was judged in order to determine whether he or she should be allowed access to a continued existence.

Another group of texts developed for use in the burials of the Egyptian kings in the New Kingdom. These were Books of the Underworld, which seem to have been a development from the guides to the afterlife found in the Coffin Texts. They are all concerned with the journey of the sun god through the night and rebirth.

There are several different Books in this category of text, of which the most famous are the Amduat and the Book of Gates. Rather than being a series of spells, they are divided up in sections, corresponding to the twelve hours of the night, and consist mainly of pictures of the different sections of the sun god’s journey with explanatory texts.