The Ramose Book of the Dead

The size of the papyrus 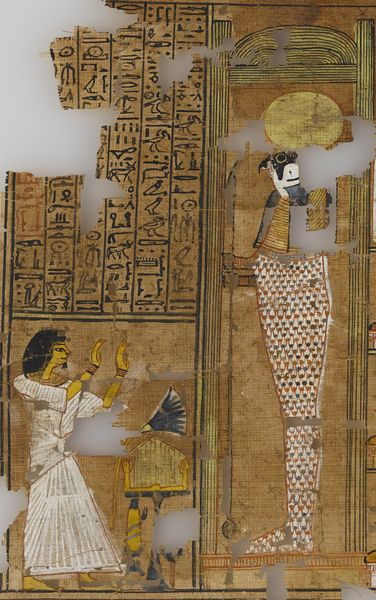 When it was originally found, the Book of the Dead of Ramose was in hundreds of pieces. As a result of painstaking work we have been able to reconstruct a great deal of the original layout, as well as establishing much of the remaining contents. There are also fragments from several illustrations which we have not been able to reassemble, but which must have been part of additional spells. So, putting these together, we can estimate the original length of the papyrus which must have been around 20 metres (64 feet) long.

The papyrus roll was originally put together from individual sheets of papyrus, on average 41 cm high. Papyrus sheets of this size would have been rather expensive as they are larger than average (about 35 cm high).

The spells on it are written in a form of hieroglyphs which is slightly abbreviated. These are known as cursive or linear hieroglyphs, or sometimes, because they occur so often in Books of the Dead, they are called Book of the Dead hieroglyphs. The handwriting of the scribe who wrote it varies to some extent and it is debatable whether it is consistently the same scribe or whether several scribes were involved.

The hieroglyphs face to the right, which would normally suggest that the whole text should be read from right to left. However, the order of the columns runs from left to right. As a result, this is known as retrograde writing, and it is quite a common feature of Books of the Dead. There are some errors in the text, in particular in Spell 125 . 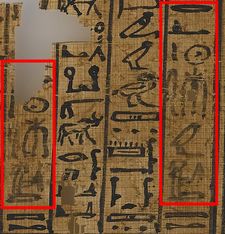 It often appears that the scribe(s) endeavoured to write Ramose’s entire name without refilling the brush with ink, perhaps for superstitious reasons. This is apparent because the ink often appears to be running out part way through the name. The most obvious examples of this are found in Spell 148 ‘for making provisions for the effective one in the necropolis’.

It is likely that the text of the spells was written out before the illustrations were added. These small pictures are usually called vignettes, and the examples in this papyrus are very beautiful, in particular the feathers of the birds. Careful examination of the papyrus has shown how the illustrations were created.